We will begin this post by a big thank you to guests couchsurfer of Mashhad ! If we had a good time in Mashhad, It is essentially thanks to them !

And yes, the angle of approach of the city is always special when it is presented by inhabitants.

En effet, We are first found in a french course, not commonplace in this country!

Why the Iranians would want to learn the french you say ? You are going to be disappointed, en général, It is not for the beauty of the language, but only to be able to emigrate to the Canada… And yes, We understand by discussing with students that their main motivation in life is to leave their country, and it happens that the Canada offers very favourable immigration conditions, with the naturalization of all immigrants, provided that they satisfy a very complete specification, whose knowledge of English and French languages (It is a little more complicated than that, with a history of points, but we pass you details). The snag is that these people are generally 3 ou 4 years that the procedure be done to see if they can go…
Finally, This french course was a good opportunity for us to make the revision of the COD and IOC, but especially to meet all these people interested in the french, in particular the profs ! 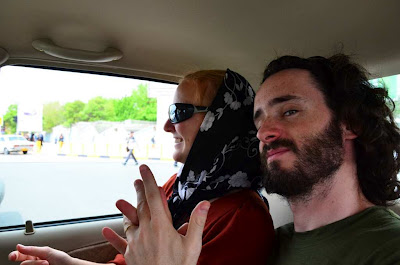 But Mashhad, Despite a small portion of the population who would like to leave the country because of the diet very, is primarily a city of pilgrimage for Shiite Muslims.

In the heart of the city, It is the mausoleum of Imam Reza. Then, You may not know who is this guy, We no more, but we didn't want to miss this place of worship which everyone told us both.
To be able to enter the religious grounds, wear hejab and black chador, la totale ! And normally, the site is forbidden to non-Muslims.
We have not been disappointed by entering the scene. Not not the dozen mosques built the next to each other are beautiful (We have seen previously were much more), but we bathed the time of the visit in an oppressive atmosphere of religious fanaticism. It really is very impressive to see these men and women to fight almost to touch the tomb of imam Reza. Certain(e)s cry while reciting their prayers, everyone affects all objects “sacred” accessible before the hands on the face, and even the dead come on pilgrimage ! Bref, We have evolved almost an hour in this genuine religious complex observing the behaviour of all these people sometimes came from the other end of the Iraq.

Outside the mausoleum, There's not much remarkable in Mashhad, and our stopover was well short (primarily to retrieve the Turkmen visa), then we just walked in parks, in the “juice bar” for enjoying smoothies and this is, What us to rest before resuming the road to Turkmenistan.