After our ride on the islands of the Mekong in Laos, Since a few years become a well known and very visited place, We wanted a bit of adventure : a little less marked for the mass of tourists trips, and a little more of lost roads and improvisation... We were not disappointed. !

Out of the box, needed us ways. Not for us, equipped cyclorêveurs of unbridled cyclomachines, but for Pascale, who joined us. The bus ride to tourists by the Laos/Cambodia border (voir article précédent) He has just, We need to find an alternative !

In the first city of Cambodia, Stung Streng, We are therefore seeking the favorite means of transport of Cambodian : scooter/moped !

With the help of a Cambodian speaking french, We dégotons one Yamaha in good condition for not too expensive. The calculation is to sell at the end of the trip : the price difference should not exceed that of a rental for more than ten days, without coercion to make it to the same place !

The bike "in the Pocket", We cross the Mekong to take a road very uncrowded for the moment : the bridge will be completed in three years ! The road is under construction also, but is rideable : missing just the tar actually.

On this road with Chinese characteristics (off like a highway, elevated, little turning points, au milieu de rien), we bother us a bit. We cross that villages "of extra", very recent, and devastated forests.

So we decided to fork, with the goal : find the hidden temple, le Grand Preah Khan ! Because of its location and its lack of accessibility, This temple is one of the least visited of all the temples of the Angkor period. Pascale being more never been there, It's a good Cygnus to visit.

The Lonely Planet when even speak, but explain that to get there, It's better to be big ; I quote : “Only very experienced bikers should attempt to get to Preah Khan we rental motorcycles, as conditions are extremely though from every side. Take a wrong turn in this neck of the woods and you'll end up in the middle of nowhere, so consider bringing along a knowledgeable motorcycle driver."

Before go us on the track, We meet some other cyclists with whom we have lunch, and who explained that they had begun to take the track but they had to turn back because the road was impossible...

We're doubling warned ! Donc, According to the french sayings, We are worth twelve people !

Commitment on the track, We are relatively confident : nothing worse than what we could see in Tajikistan or Uzbekistan, or in Mongolia : too easy ! Besides Pascale on the scooter is doing almost better than we ! After half an hour, fatigue can be felt even when : roll in the sand, under the heat of this country, There is nothing a health walk ! We decide to stop there for the day : a wooden hut, which half of legs burned with the fields, will make a good shelter for the night ! 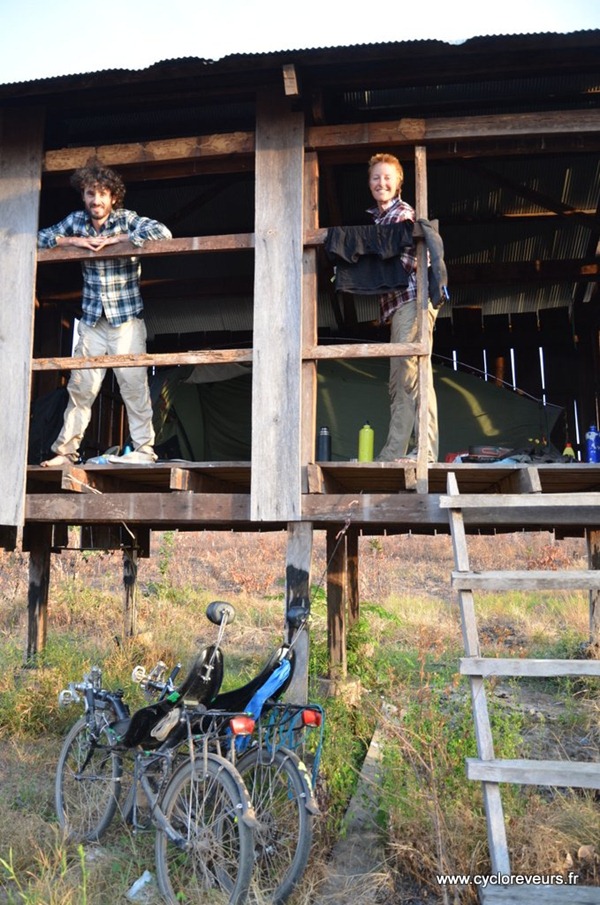 Le lendemain matin, get up early to try to enjoy the fresh air as long as possible. We now therefore the road, or rather the track. 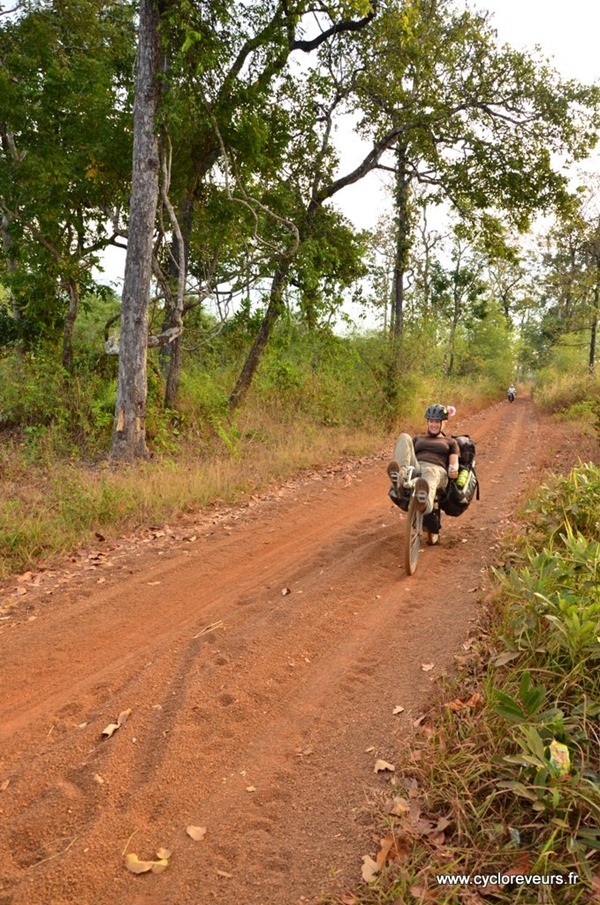 As we explained during our tours of sandy country, the recumbent lends itself quite well to exercise, but it takes an effort in other more important than on bitumen. Early in the morning do so not much problem, It is cool and we're cool ! As time passes, our energy dissipates, increasing our hourly rate of fall... 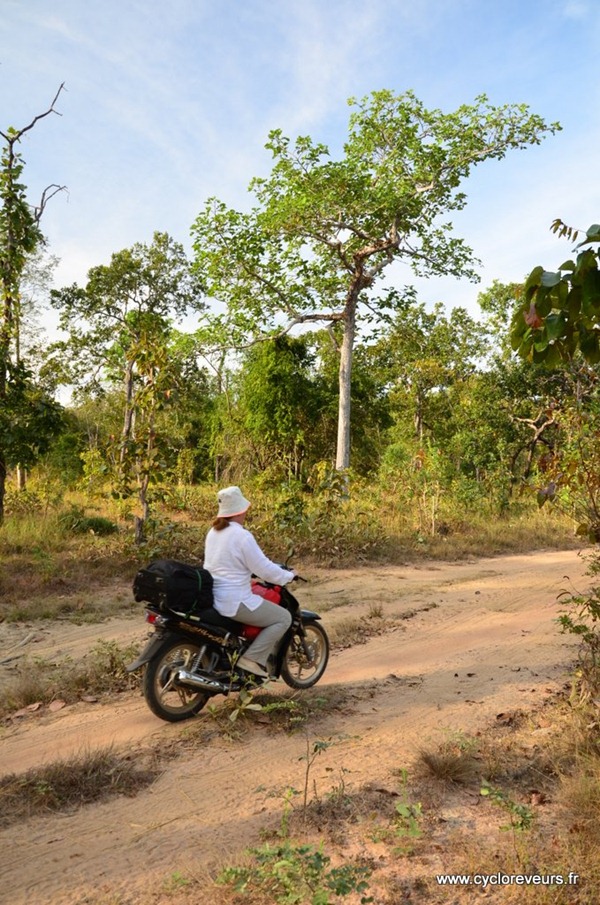 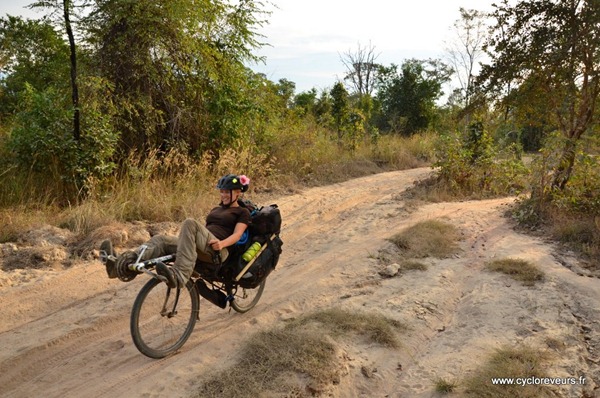 Around noon, After seeing all the colors (sable, Pebble (the worst !), ruts, paths covered with brush, etc.), and we being lost twice (the Lonely Planet was right ! -Fortunately out of nowhere local gave us on the right path !), We are exhausted ! 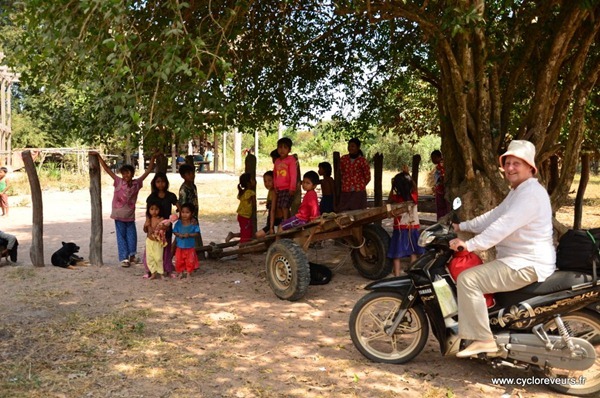 A providential village suddenly comes to us : ouf, the civilistaion ! De plus, an NGO has built them a pump, and it still works : We are under to cool the system overheating !

This break has been providential, but we were finally not too far from the goal, because about five kilometers further we fall on a slightly larger village, with small restaurant and all ! 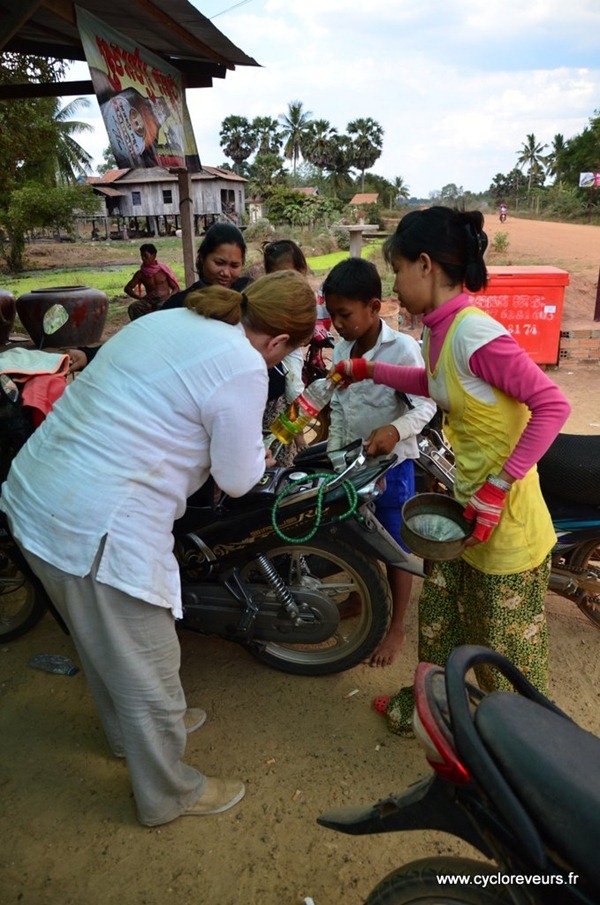 This village is the closest point of the famous temple Preah Khan What we are looking for, But even if we all close, We spend the hottest most at the cost as possible in one of the restaurants, next to pétanque players (with implementation of money attention !) and makers of jars in concrete. 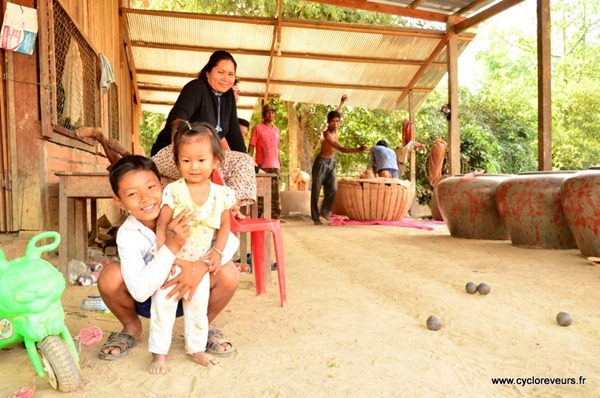 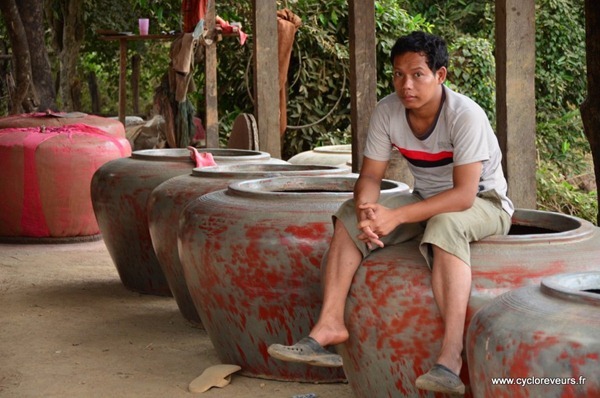 Around 3 p.m., We decide finally to go out of our shelter meets the temple that is supposed to be the greatest temples in the Angkorian period... 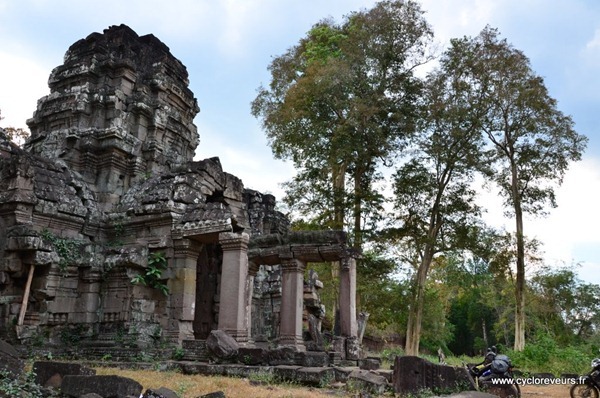 En tout cas, It is really fun to go up there, and it will not be attempted without Pascale !